I spend one weekend in Stockholm, together with Tierra Ambassador Katrine Vandet Salling, to be there for the Tierra Boulder Battle. We were lucky enough to get the chance to be co-commentators at the event. It was a great experience and a new way for me to watch a competition.
Afterwards we dropped by the Tierra Headquarters. There is some really nice people behind all this and it reminded me of how much I enjoy being a part of this company!

Watch the stream if you missed the event. Some very cool boulderproblems set by the participants!

In Copenhagen Boulders we held Copenhagen Boulders Cup part 1 out of 3. I was in charge of the routesetting and wanted to set something different. We all agreed in the team that we wanted to present some boulderproblems that would challenge the climbers in all aspects. But I also wanted to top the last competition.
What is really impressive is if a routesetter can match the level of the boulderproblems with the level of the climbers, give the crowd a cool show and have the climbers climb some very funny boulderproblems at the same time.
I think we did a good job. We risked a bit with some big swings, but I wanted to make sure we had a great show and that part went really well. Unfortunately we set the last female boulder a bit too hard. If there were just one top on the last female boulder the competition would have been almost perfect.

I think it is possible for us to have such a good indication of the level of the climbers, because we see what they can do in the gym on a daily basis. Without those informations it would be much more difficult to set the perfect level.

We had a qualification with 29 boulderproblems. I did not have so many volumes available, so we used around 30 volumes for the 6 final problems and set the whole qualification without a single volume. It was a great challenge and we were very satisfied with the result.

The video from the event is soon ready to be released, so watch out when it drops on the blog and on facebook!

After the competition I got on a plane to Zürich. The climbing destination was set on Magic Wood. I had heard so much about the place, but never been there myself. So now it was time to chalk up and climb some of the best granite boulders in the world.

When I first got to the forest I was very humble. The whole scenery was very overwhelming. I got so much energy just from being in the forest, breathing the fresh air and being close to the strong river. There is really something magical about this forest! 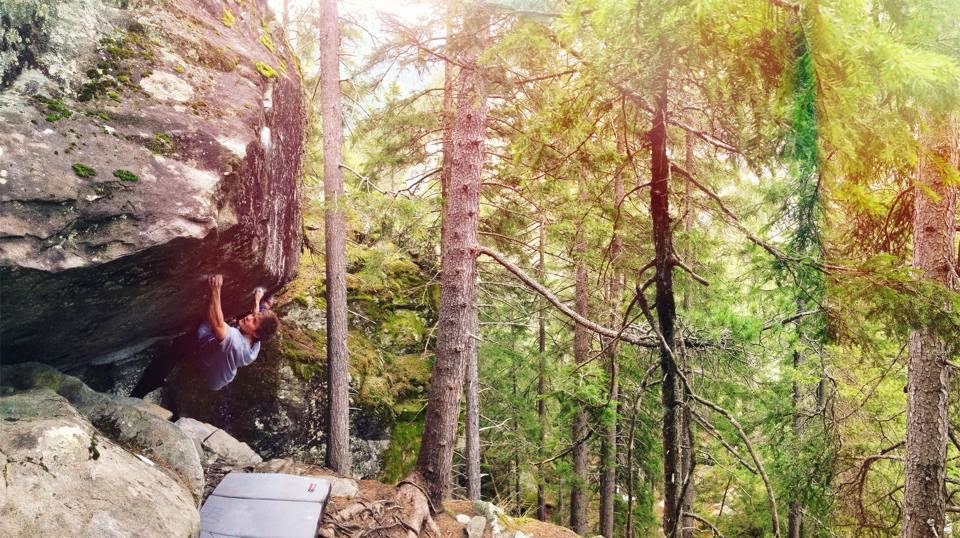 After a couple of hours I slowly found out why this forest is magical!

There is something in the air! The atmosphere, the nature and the people are so friendly. And it makes it so easy to enjoy the climbing even more.

I wanted to relax and enjoy the nature so I did not have any expectations or specific lines I wanted to try. But after a couple of days it became clear which boulderproblems I had to climb! Some of the lines in the forest are the most beautiful pieces of rock I have ever seen. It is no wonder why the place is so popular.

One thing that really surprised me was how beautiful the forest is. There is no trace of people, no trash. It is really good to see and it makes me enjoy the place much more. I have to return as fast as possible, to experience more natural magic. 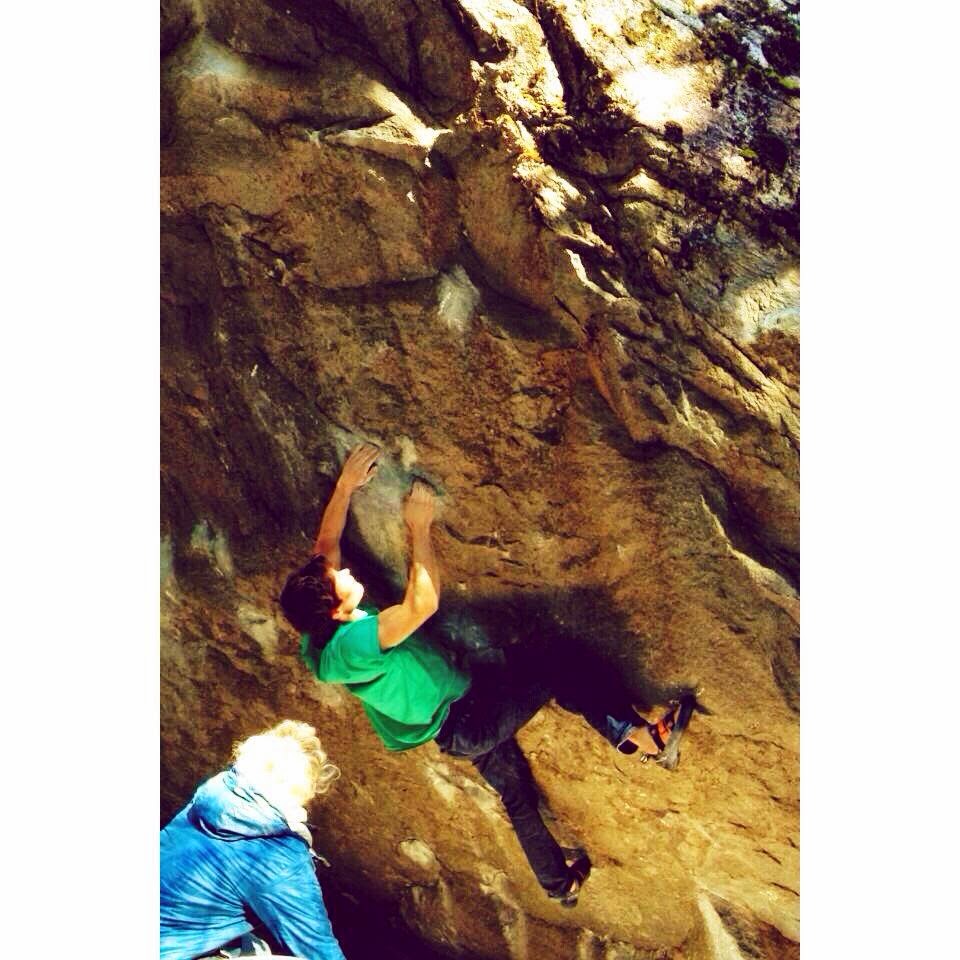 I did climb some boulderproblems on the trip. As I wrote earlier; I wanted to relax and enjoy the forest, so I only tried things I cold do in a single session. So most of the boulders I did very quickly.
One day though, I tried New Base Line 8B+. I did all the moves and linked the crux after 30 mins of play. I could do the line in 3 parts, but did not want to invest too much time in one boulder when the forest was full of beautiful lines!
After the trip I realized that I can probably do some of the really hard lines if I invest some more time. 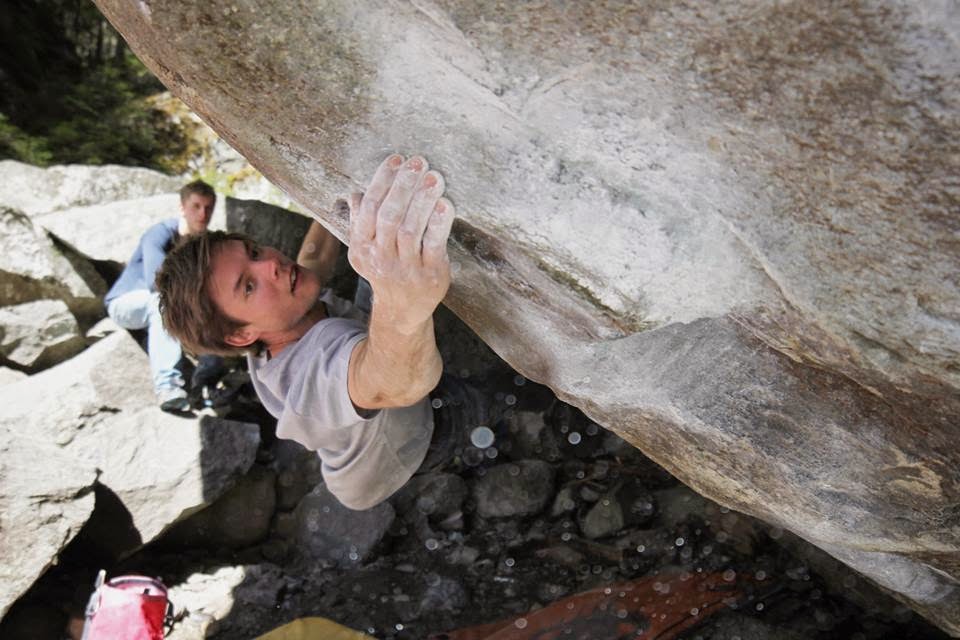 
Here is some of the beautiful lines I managed to climb:

I will hopefully return to Magic Wood again this year and maybe it is time for some harder tries ;) 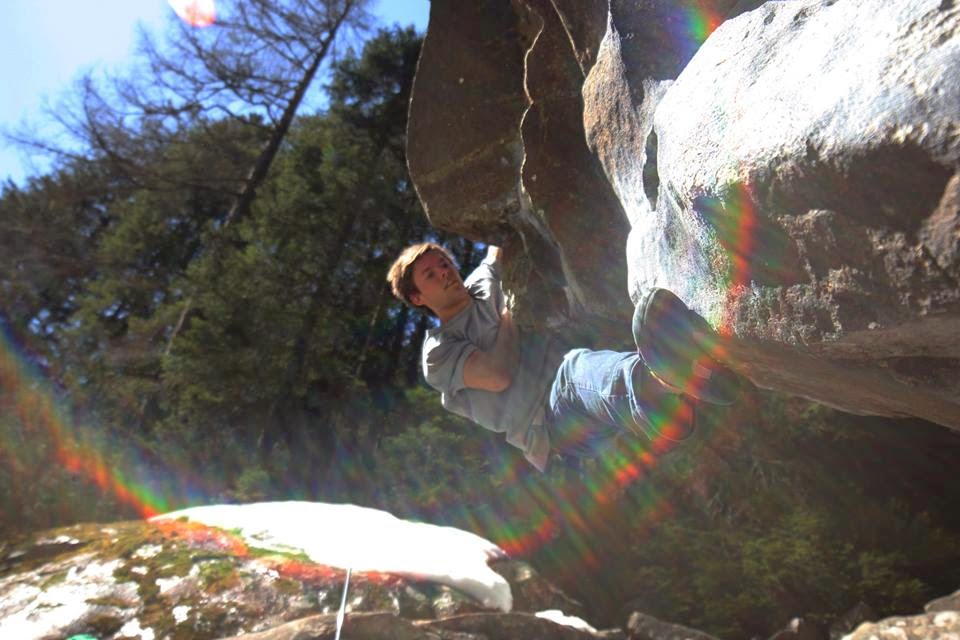 Now I am back in Copenhagen and focused on preparing for the Boulder World Cup in Grindelwald 10-11 of May and Innsbruck 16-17 of May. 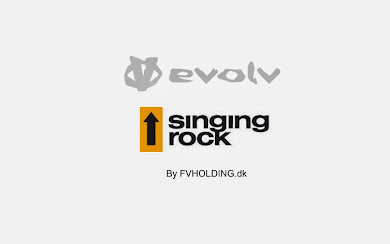